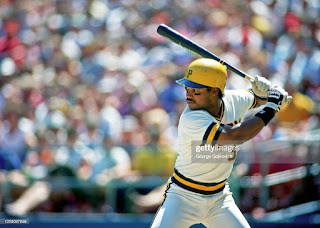 I don’t think anyone ever called Johnny Ray, The Chouteau Kid.

I made it up. I wanted to add some pizzaz this week. A little zing. Form a legend around a guy, and, in baseball, a nickname is a sure-fire way to do it. The Chouteau Kid. It could’ve stuck. Johnny Ray was a big deal to his Oklahoma home town (pop. 2,093). He’s listed as notable person from Chouteau on the town’s Wikipedia page. I don’t know if it’s still there, but there used to be a roadside sign outside of town that said, “Chouteau, Ok. Home of Johnny Ray.” I grew up in a suburb of Pittsburgh. I don’t have any roadside sign saying this is where I’m from. And I’ve written books. To be honest, you could ask anyone in my home town, and there’s a 99.9% chance no one would remember my name.

But this essay isn’t about me and my personal need for recognition. This essay is about Johnny Ray.

I’ve written a good deal on this blog about Willie Stargell. I’ve dedicated posts to him. Put Willie’s cards on the Junk Wax Jay blog whenever I could. Extolled his virtues. Confirmed his legend. Told everyone up and down the virtual block, how Willie Stargell was my favorite player. My first favorite player (although that could also be catcher Ed Ott). I wasn’t lying about that. Not to sound all Mark Twain…but I got it mostly right.

While I love Willie Stargell, I have also said here that my awe of him comes more from his past actions on the baseball field (stuff I read about and subsequently saw archival footage of), than anything I witnessed as a fan. To reiterate, the Willie Stargell that I came of age to was a forty-year-old, past-his-prime bench warmer who came up and hit to occasional pinch-hit HR, and acted as the soul, the link to the glory years, to a team that was beginning to fade into oblivion. At least for a number of years in the 1980s. The Willie Stargell I watched retired when I was eight-years-old. A year or so before baseball become must see TV for me.

Johnny Ray, on the other hand, was the guy that I watched. He was the kid at second base, turning double plays, and getting clutch hits at the plate, doing his best to keep the woebegone Pirates at least in the game. It was Johnny’s batting stance I mimicked. Johnny’s cards that I sought in packs. The player whose wristband number I wanted. Whose t-shirt I wanted to wear. The player who made wish that I wasn’t a lousy left-hander so that I could play second base too.

Johnny Ray was the first baseball player that I truly fell for because of what he did on the field, and not because of the legend that surrounded him. He was the first player whose cards that I could say I actively collected. 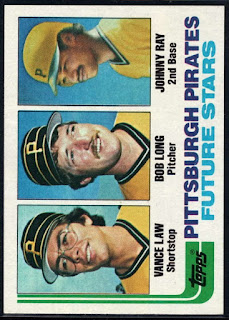 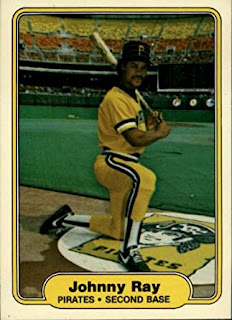 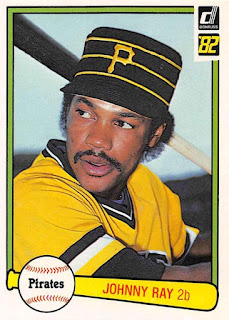 And he wasn’t a bad guy to root for.

Johnny Ray was actually drafted by the Houston Astros in the 12th round in 1979. He made his way to Pittsburgh as part of a trade for Phil Garner, one of the heroes of the 1979 World Series Fam-I-Lee. Ray immediately became the Pirates starting second baseman that year, playing in the remaining 31 games, hitting .245 in 102 At-bats. But better things were to come.

In Ray’s full rookie season, 1982, he batted .282 with 7 home runs and 63 RBI, playing all 162-games that season. The Sporting News named Johnny Ray their Rookie-of-the-Year. But he came in second on the vote that really counted. The Baseball Writers Association named the Dodgers second baseman, Steve Sax, rookie of the year in 1982. Always the Dodgers. It’s always the Dodgers.

But it was that kind of play that made Johnny Ray a mainstay at second base through some of the worst years to be a Pirate. During Johnny Ray’s tenure in Pittsburgh, he played on teams that amassed five losing seasons, including a 57-104 season in 1985, a year in which Johnny Ray himself hit. 274. It was easy to see why he’d become some dumb kid’s favorite player. Other than Tony Pena, it was slim pickings in Pittsburgh in the early to mid-1980s.

All in all Johnny Ray played seven seasons in Pittsburgh. Ray managed a .286 batting average with the Pirates, with 1009 hits, 37 home runs and 391 RBI. Oddly enough he never made the All-Star team during his tenure in Pittsburgh. That distinction almost went annually to Tony Pena. But Johnny Ray did lead the National League in doubles in both 1983 and 1984. 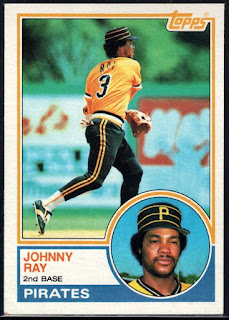 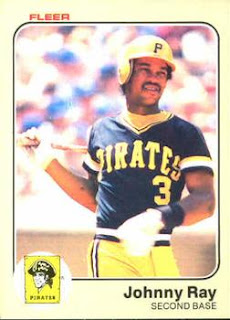 And he was a fun guy to watch.

But going into the 1987 season, Johnny Ray’s time in Pittsburgh was coming to a close. After years of losing seasons, the Pirates began to turn things around in 1987, mostly through in influx of rookies and young players with names like Bonds, Bonilla and Van Slyke. Those guys replaced names like Madlock, Parker and Tekulve in the hearts and minds of Pirates fans. And while Johnny Ray played most of the 1987 season (batting a respectable .273 in 123 games), he was destined to get swept up in the new youth movement happening in Pittsburgh. And on August 29, 1987, Johnny Ray was traded from the Pirates to the California Angels. He was replaced at second base by this guy: 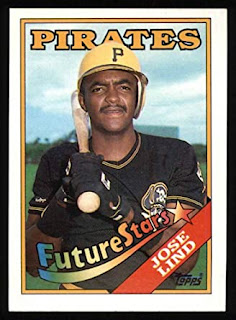 Who had a not too shabby a career in Pittsburgh himself.

Right now, I’m trying to recall my youth. Trying to recall what it was like when a favorite player got traded. In Johnny Ray’s case…it’s actually kind of hard. In 1987, Pirates fans knew that changes were afoot. We were already given the grandest of April Fool’s jokes when Tony Pena was traded to the Cardinals for Andy Van Sklye, Mike LaValliere and pitcher Mike Dunne. By August of ’87, Van Slyke and LaValliere had already secured a place in our collective hearts. Mike Dunne was on his way to winning 13 games, and hopefully becoming a new ace on our staff.  And, to be honest, another player had taken Johnny Ray’s place as my favorite Bucco. 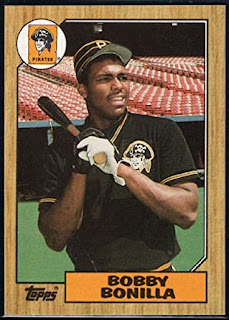 I wish that I could say that I followed Johnny Ray’s career after he left the Pirates. But, in truth, I really didn’t. I actually liked having “Chico” Lind at second base. He fit right in with that cast of young, goofy, good ballplayers that the Pirates were building into the NL championship teams that we knew and loved in the early 90s. In 1987, a Pirates fan’s attention wasn’t focused on what we’d lost (like we had before and what we’re going through now), but on what we were gaining. And we were gaining a lot. It was an exciting time.

Still, Johnny Ray managed three plus more seasons in the big leagues with the Angels. And while he wasn’t a Pirate and while I wasn’t seeing any West Coast ball at all, I did still keep and collect his cards. Ray batted .296 over those seasons, with 493 hits, 16 home runs and 203 RBI. Ray was even selected to the 1988 All-Star game, the first and only time in his career. But after the 1990 season, Johnny Ray left Major League baseball to play two seasons in Japan for the Yakult Swallows.

He has since returned home to Chouteau, Oklahoma, where I hope that sometimes he’s able to look back fondly on his time in Pittsburgh, knowing there are fans still out there writing about him, and collecting his baseball cards. 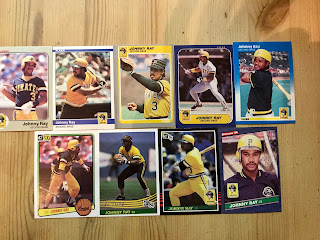 Thanks for reading. Happy Collecting.

On the Road : Sports Card Shopping in Buffalo and Pittsburgh 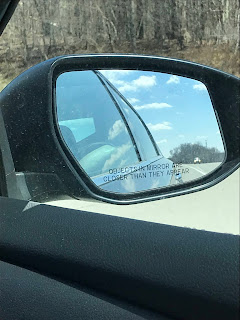