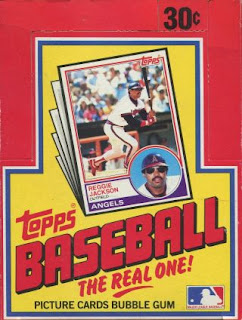 The Paganini’s were moving back.

Which meant we had to vacate their home. The one my family had been renting from them for almost a year since we’d returned to Pittsburgh from Wellsburg, WV. The Pittsburgh suburbs. The land of plenty. Cars. Kids. Lawns. By age nine I’d gone from living in the city to a rural area to the land of milk and honey, where I watched a neighbor girl while away her summer days transcribing the entire script of the movie Annie, into a tape recorder, from memory. I didn’t even know my times tables up to twelve, and she had her lines down pat.

But I knew moving. Three homes in the last three years. Time for a new neighborhood. Time to be the new kid again. Time to pack up all my stuff. The clothes. The Star Wars figures. The baseball cards that I kept in blue suitcase. Stretch the legs in a new frontier that I was to make mine…but for how long? A brand-new lawn for my dog, Sparky, to turn into mounds of worn-out dirt, like he had the Paganini’s backyard. To hell with them.

Does this look familiar to anyone: 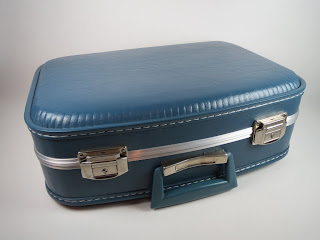 Sparky wasn’t even our dog. I mean he was. He lived with us. We fed him. He sometimes slept on my bed. My parents cleaned up after him. Sparky made his way into family photos from time to time. When I say he wasn’t our dog is to say that he wasn’t ours originally. Sparky ended with us through chance.

Our dog had been Sam. Sam was a bronze-colored Golden Retriever/Irish Setter mix. My parents got Sam shortly before we made the move from Pittsburgh to West Virginia. We were going to have an acre of land in our new home. An acre of land meant getting a dog. A big dog. It didn’t matter that we already had another dog, Fawnie. But she was a lap dog. An indoor pooch. A kick-me dog in lesser circles of empathy. She’d cover no real ground.

Sam was a big galoot. A lumbering trouble maker with a heart of gold, who chaffed at the sound of motorcycle engines. A god, for whom, no trifling leash could keep him chained up in a yard. Sam’s antics made him the bane of our West Virginia neighborhood. He made use of that acre of land and more. Farmers detested him. Threatened to shoot him. One did…in the leg. But that’s a story for another time.

Because Sam roamed with a Kerouacian spirit that my parents couldn’t quell, it meant that Sam disappeared a lot. Went missing for days. Went missing for weeks. Was gone so long we feared the farmers made good on their threats to off him mafia-style. As mafia as West Virginia got.

But Sam always came back. Came trotting back home when he’d exhausted all of his dog possibilities and needed a good meal and a night’s sleep. Sam always came back. Until the one time he didn’t. Until Sam was gone for good. Months went by. To make a long story short, about a month or so before we were supposed to move back to the Pittsburgh area, my mom got a call. Someone had found Sam. We raced to the scene with boundless excitement. We had our Sam back! He’d just gone too far afield this time and couldn’t find his way home. Bad dog! Yet we were so happy to get to him and bring him home.

Except the dog in question wasn’t Sam. The dog in question wasn’t our goofy Golden/Setter mix. It was some mutt that looked a little bit like a wolf. An exuberant, kind dog, but not our Sam. He just had Sam’s tags on a collar around his neck. A cruel switcheroo. My Mom, being the bleeding-heart animal lover that she was, took this strange, new dog in anyway. It was either that or they were going to put him to sleep. Through fate and circumstance, Sparky, as we named him, was ours. And he was great, though he did bark a lot.

Moving into a new place is always difficult. Like I said, we’d done it three times in last three years. Thankfully my parents found us a place not more than a ten-minute drive from where we were already living. I’ve already mentioned the hard, kid stuff about moving. But I never knew what it was like on parents. Setting up a new house. Making sure it felt comfortable and safe for the children. Finding a new, trustworthy babysitter, or someone you could trust, locally, with your kids. Navigating all of those new adult relationships in a neighborhood. Moving is hard on everyone.

I remember there was a knock on the door. A frizzy-haired, frustrated young woman standing on the other side. Then my mother shaking her head. My mother apologizing profusely. Jesus, what had my brother and I done already? I wondered. We hadn’t been in the neighborhood more than a month. My only friend was A.J. across the street, and all we did was play with Star Wars action figures. Whatever brought that anxious lady to our doorstep couldn’t have anything to do with the antics of children.

How I wish it had. The woman was at our door because of Sparky. She was there because her grieving mother couldn’t stand his barking. She’d just lost her husband, the woman’s father. All of the barking coming from across the street was causing her mother undue stress. Sparky was disrupting their time of mourning. Even though he stayed chained in our backyard and never had the penchant for roaming that Sam had, there were threats by the woman to call animal control. To keep the peace a decision had to be made. Someone had to go. Sparky.

I don’t remember much about the day was gave Sparky away, except the heavy weight of sadness. My mom was upset. My brother and I were upset. My old man, ever indifferent to animals, went to work. It was a long, solemn ride to the Pittsburgh Animal Rescue League. The place was a no kill shelter, but my mom had to be thinking we were doing to Sparky what we promised we wouldn’t when we found him with Sam’s tags. We were letting him go.

She had us kids wait in the car while she took Sparky into the building. Two quick hugs and he was gone. Moments later, my mom came out alone and crying. The deed was done. Our new neighbors could now mourn in peace. My poor mom wanted to get me and my brother something to make the loss of our dog up to us. I could only thing of one thing. Baseball cards.

Yes, this post is still about baseball cards. At least somewhat. And in 1983, Topps and Fleer were my main brands. The Topps brand still wins the top prize for me. The action shots were better than Topps had in 1982.

I mean look at this one: 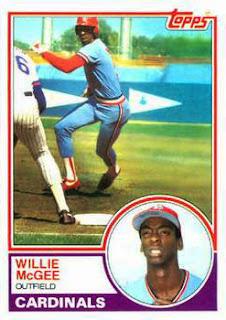 Most of Fleer’s 1983 photos were staged and sometimes it looked like all of the photos were taken during a rain delay at the ballpark. 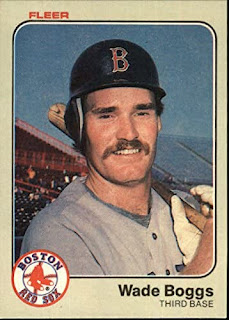 The Topps design with that big photo in the bottom corner is a classic now. A touch modern. A touch 1963, The orange and gray card stock backs are still striking to me today.

I’ve said it here before, but I put 1983 Topps baseball in any list of my favorite Topps cards ever produced. Even with the stinging memory that comes with them.

My mom took me, my brother, and our collective sorrow to the Thrift Drug, where he and I each selected a pack of 1983 Topps cards. From the bottom of the wax box, of course. The rest is a blur. I couldn’t tell you what I got in that pack. I wish I could say it was a Tony Gwynn rookie card. 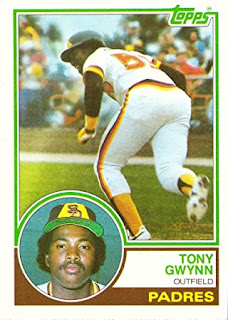 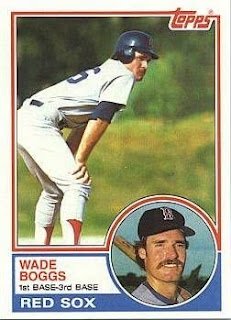 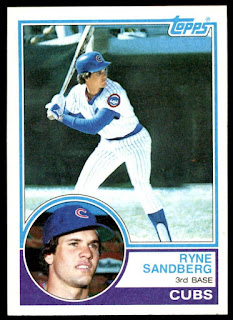 I probably got Ron Kittle. 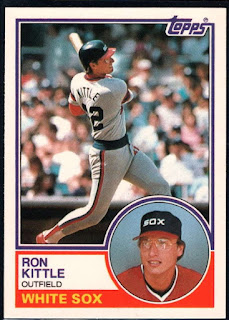 I wish I could say I got something great as a compensation for giving up my dog. My companion. My friend. Truth is, I wouldn’t have known back then if I got something good in that pack. I was nine. My knowledge of cards and players wouldn’t increase until later in that year when I met Miller. 1984 is when cards began to really matter. Basically, I sold out man’s best friend for nothing.

There is a cruel irony in all of this. Weeks after we gave up Sparky, my brother and I were outside riding bikes in a circle. We lived on a dead-end street that was a cul-de-sac. All of the sudden, a dog started barking at us. I mean he wouldn’t let up. We looked over at the house where the dog was barking. He seemed mean, aggressive, lunging at us like he wanted to break his chains and attack. In the nick of time, someone came outside to shush him.

It was the frizzy-haired woman who had come to our door to complain about Sparky! The same woman who’d threatened to sick animal control on us. The woman with the mourning mother who couldn’t take the noise of a dog. It was her fucking dog barking at us. Her mutt! And that salivating beast would bark at us for years. Riding bikes? Bark! Playing Wiffle ball? Bark! Playing Nerf football? Bark! Bark! Just trying to walk down the street in peace? Bark! Bark! Sitting on your porch on a humid summer night? Bark! Bark! Bark!

Thanks for reading. Happy collecting.

Next Friday:  I have something special lined up. A guest blogger! Poet and artist Russell Streur is going to be taking over and discussing former American League pitcher…Bobo Newsom. Then I’ll be back on Friday, January 22nd, to tell you the tragic tale of those cards I put in that blue suitcase. 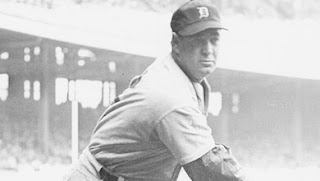